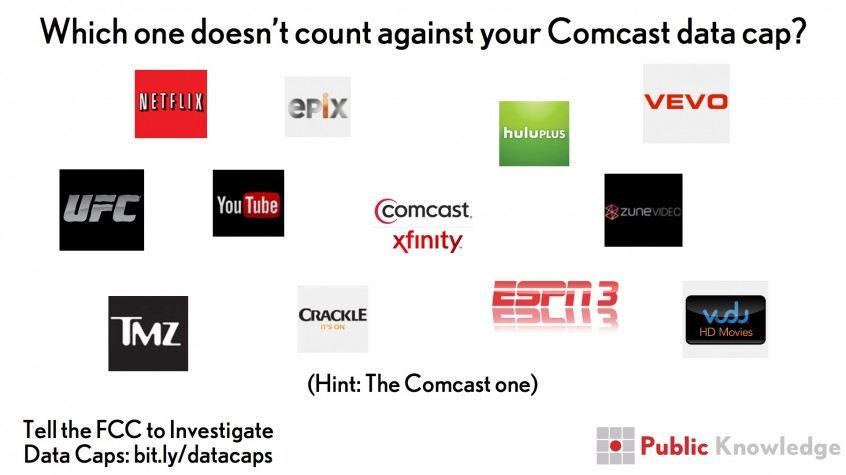 Get ready for your home Internet connection to feel like your smartphone — bound by data caps, a large overage fee waiting to happen. Comcast gave some users the bad news Thursday. Consumers who exceed 300 GB in a month will have to pay for overages at $10 per 50 GB tier.

Not surprisingly, they have the option to pay an extra $30 to get the service they have currently, without caps.

Internet service providers like Comcast have been chomping at the bit to change their business model and charge consumers by the bit the way wireless providers do. Comcast’s initial allowance seems generous — some notes sent to users say it’s unlikely they will hit the cap based on their prior usage — but it’s easy to imagine that’s temporary. The Internet keeps birthing high-bandwidth applications like streaming HD video. Users may ultimately run into these caps. And there’s nothing to prevent Comcast from lowering the limit going forward.

“An important update about your XFINITY Internet service,” the email reads. “We’re writing to let you know that we will be trialing a new XFINITY Internet data plan in your area. Starting October 1, 2015, your monthly data plan will include 300 GB. We will also trial a new ‘Unlimited Data’ option that will give you the choice to purchase unlimited data for $30 per month in addition to your monthly Internet service fee.”

The news comes with some “courtesy” concessions from Comcast.

“We’re … implementing a three-month courtesy program. That means you will not be billed for the first three times you exceed the 300 GB included in the monthly data plan,” the email says. “If you are on the 300 GB plan, we will send you a courtesy ‘in-browser’ notice and an email letting you know when you reach 90%, 100%, 110%, and 125% of your monthly data usage plan amount.”

If you haven’t seen one of these emails, you can learn more about the data usage trials at Comcast’s website.

On its FAQ page about the new usage fee, Comcast describes it as a trial, and says it impacts consumers in the following areas: Huntsville and Mobile, Alabama; Tucson, Arizona; Fort Lauderdale, the Keys and Miami, Florida; Atlanta, Augusta and Savannah, Georgia; Central Kentucky; Maine; Jackson and Tupelo, Mississippi; Knoxville, Memphis and Nashville, Tennessee; and Charleston, South Carolina.

For some time, Comast has been including usage statistics on consumers’ monthly bills, which hinted at this move.

Tolled home usage can be bad news for consumers who end up being forced to download streaming video they don’t want, like auto-play videos from sites like ESPN.com. That data, which already eats into consumers’ mobile data limits, will now eat into the limits they face on their Internet usage.